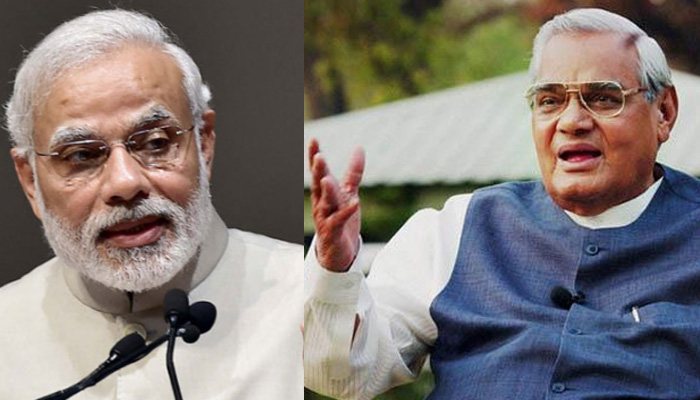 While the world is still reflecting on Vajpayee’s legacy- between my travels- I couldn’t stop myself from comparing the legacy left behind by ABV and the huge impact BJP’s second prime minister, Mr Modi has been busy creating.

ABV was absolutely, most certainly, the tallest statesman Indian politics ever saw. (Pic courtesy Zee News) Far more than Nehru, who was labelled one – by British leftovers and could never get anything done. Whenever I try to dig in to look at Nehru’s achievements, I struggle, because almost always, all good works done during his tenure, were those by stalwarts like Sardar Patel, who disagreed with him rather openly. So many books, auto bios of leaders of that era discuss candidly that had it not been for Patel, India would not have been what it is today. While a unified India’s was Sardar’s gift to us, Nehru left us a messed-up Kashmir, the way it is today. Anyways, so much about Nehru, because this post is not about him…

I am pretty sure that this post is going to be ripped apart like my post on Tendulkar, disagreeing hugely on Bharat Ratna having been conferred on him, which I still believe, very much belittled the highest civilian honour of our nation, having been bereft of true sporting heroes.

Prior to the Modi era; and I guess during Manmohan Singh’s fully wasted decade (I still struggle to list 10 key game-changing takeaways), Bal Thackeray, once said, ‘India has never had a Prime Minister since 1984’. Couldn’t agree more with the Shiv Sena tiger. What marked Indira Gandhi’s terms was a clear, firm decision making. Right or wrong, is a completely different discussion.

Politics, has two kinds of leaders. All lead. Only a few motivate. Notwithstanding the fact that there are and would always be corrupt, black sheep in politics of any country, the basic foundation of politics has been and would be -service to human civility. With this in mind, we have had several leaders who stood tall, Sardar Patel, Bose, Jagjivan Ram, Ambedkar and even, if I may say, even lesser mortals and crusaders like Anna Hazare, who lost the narrative enroute. All meant really good.

Though it may not be fully inappropriate to compare the leadership styles of ABV and NM, yet since I have no leanings for any office, I can take liberties to be politically incorrect.

What prompted me to write this was when I watching discussions on a couple of channels, just after ABV’s news came in. As if this was the opportunity, the politically irrelevant Shouries and likes were waiting for. Rather than the discussion being the works and legacy of ABV, it drifted to an implied ABV Vs NM debate, which was very appalling. Rather than celebrating the life and works of ABV, connotation of the debate quickly drifted to belittling Modi.

That compelled me to truly ponder about the legacy these two stalwarts of our era have left, or are leaving for us. For me, ABV was a terrific orator, a great leader, statesman, poet par excellence, level headed individual and certainly a maverick. Also he was a ‘perceived’ secularist, with an accommodative outlook which made him more acceptable to a dappled opposition, just because they knew that ABV will not, disruptively, ever want to rock the boat. Thats’ where I think Modi is in the process of leaving behind a legacy that is unparalleled in its own way and would always be remembered.

That ABV may, or may not have been the first choice for PM nominee of the parent political cadre is just one part. Contributions of LK Advani and Joshi, though they were blind sighted by love of the chair later, were possibly far more than that of ABV for BJP led NDA to have had a shot at being in the pole position. Vajpayee having been as a known moderate was far more acceptable to the allies who knew it would be easier for them to work with the so-called ‘politically untouchable’ BJP under ABV’s leadership, rather than working with an Advani-Joshi’s nationalistic BJP headship. BJP, left with no choice, had to give in, to arrest the rut our nation was in, back in 1999.

BJP won the 1999 election primarily because Indian electorate was just too tired of the offendingly, embarrassing political games which were being played for our country’s top leadership, which allowed for sub-par leaders like Devegowda to be our Prime Minister.

However, I think it was ABV who lost the 2003 election, more than the BJP. It was on account of multitude of factors. One, public memory is truly short and all good works done by ABV were quickly offset by just one erratic season of rains. Inspite of the known chair obsession, aging Advani and Joshi, star campaigners were on their way out and ABV never really wanted to push for another term and did not care about truly nurturing the second line then. Onion prices helped the opposition more than they could have imagined and the Sangh cadre was anyways not a big admirer of ABV as he was, just ideal compromise candidate. While Pokhran 2 and the massive road networks are ABV’s legacy, yet Advani and General Khanduri had key roles to play.

And then 10 years went by, with almost no real public memories of the decade 2004-14. I struggle to recall any truly impactful or game changing strides our country took during this regime. What Dr Singh never realised was that in a country of 1.2 billion people, with almost half living under poverty lines, an incremental 6-7% growth, is simply NOT an acceptable solution. 2004 came and 2014 went by. As quietly as Dr Manmohan Singh.

And that’s where Modi, even though on the back of very low baselines set by Dr MS, provided hope. And he still does, hugely.

Rather than just tweaking a policy or two, here and there, Modi was willing to ruffle the feathers, both within the party and with the electorate. Importantly, he was willing to rock the boat- with the bureaucracy, as well. He also realizes that inspite of the best of intentions and efforts, he may or may not get another term. So this was, possibly, his only chance. He understood that for a 1.3 b populace now, incremental advances just wouldn’t work. Only disruptions would.

At a personal level and in my line of work, I have had a chance to engage very closely with two ministries and I must say, that the change is not just palpable, the change is stark, and, an in-your-face transformation. From that ‘Chalta Hai’ attitude in most ministries to, let’s get this done, is very contrasting and refreshing. Modi certainly has a gift of choosing the right guys- mostly.

And then he brought in game changers like Jan Dhan, Ujjwala, Mudra and more recently the National Health Mission. Changed terms of engagements with an imposing China, stood up to the US in key issues like climate change, reached out to almost entire globe. And playing a huge political gamble, he brought in demonetization and finally the GST. Whether these were successful, only time will tell. However, it is undisputable that no one- but Modi, had the audacity of bringing these disruptions in…

Like, for any leader, there will be hits and misses. While I believe, Modi has been truly phenomenal, yet so much more could have done for the agronomy. Increasing farming MSP really, isn’t a solution, increasing per hectare productivity- disruptively- is. Modi possibly missed a boat here. So much more could also have been done on arresting the build of this misleading Hindu intolerance narrative. Disruptive reforms in education was another area which never received his attention in the way it should have. Wrong people were put on the job. But come to think of it. Just fours years… He certainly, needs more time…

Meanwhile, for #Mandate2019, just a few months away, the stinking opposition narrative, already is ‘Anyone BUT Modi’. Funnily, these are the same people who are seemingly celebrating ABV and spurning Modi in the same breath.

So much so that Mayawati is agreeable to work with Mulayam, Mamta with Congress and the Congress with Left. All realize that it’s now or never. Systemic political corruption is going down. NGOs are being audited. Shell companies are being struck off. Political coffers are drying up fast, very fast.

Finally, to conclude, its unfair to compare ABV to Modi. While as a stateman, ABV ruled the roost, was an Orator par-excellence, and like the opposition, I thoroughly adored his speeches.

Though, as a PM and one who truly leads, Modi motivates, his speeches may not be as pleasing as ABV, but motivate hugely. While Vajpayee’s leadership primed up the self-belief in BJP cadre that the party could rule for 5 years, I personally am convinced that Modi will lead India to its rightful place in the global order.

We are fortunate to have been living in an era which saw statesmanship of Vajpayee and stellar, decisive leadership of Modi, heralding us into the new India – we, hopefully, would see by the 75th year of our independence…! 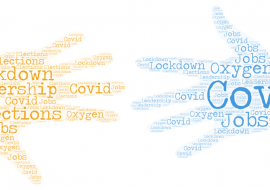